Wild: From lost to found on the Pacific Crest Trail

Over Thanksgiving break, I embraced my Texas roots and went hunting with my dad and younger brothers. For my “hunting book”, I chose Wild: From Lost of Found on the Pacific Crest Trail by Cheryl Strayed.  I thought to myself I’m totally just like this woman in the book who backpacked 1,100 miles through the wilderness because I’m sleeping in a campervan for three days and peeing outside. The memoir makes for a better story than my “camping” trip. The run down is as follows: Cheryl is devastated by the premature and tragically painful death of her mother (Bobbi) who happens to be her best friend. Her dad was an abusive dick and eventually Bobbi fled with Cheryl and her two siblings.  Bobbi’s single-working-mother status did not dilute her optimism and immense love for her children. When she passed, Cheryl unraveled as a human being. Her experimental nature became hazardous as she dabbled with heroin and random, unprotected sex. Consequentially, her marriage dissolved and her friendships waned. In order to redeem herself from rock bottom, she decides to hike a famously challenging West coast trail and regain the “Cheryl Strayed” she had lost with the loss of her mom. I did not do any heroin while on my hunting trip (thanks a lot for being so uptight, dad) but I did eat exclusively meat with no side dishes for every meal, which is probably just as unhealthy.
Incidentally, I snapped this charming, rugged photo. 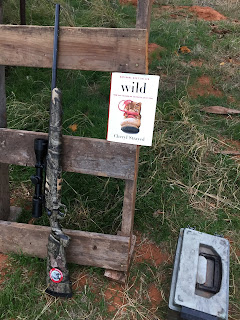 I had just sniped a deer (swag) and had to set my book down while I went to retrieve my future noms. When I returned, I noticed how picturesque it all looked and couldn’t help capturing the moment. Not pictured: a dead deer to the right of the frame and the irony that Bobbi was an avid anti-hunter and animal rights activist.

I read this memoir while in the deer stand next to my dad. He was probably judging me seeing as I spent most of the time stifling sniffles because this book is about death, struggle, restoration, and all those other things that make you feel simultaneously happy and sad. Of course, I can’t just let my emotions get the best of me when I have to maintain a hunter-mindset, awaiting unsuspecting animals with bated breath. That’s tough to do when Cheryl Strayed is making you feel all of the feels.

Some readers will recognize this story from the 2014 widely praised and aptly named film, Wild. Reese Witherspoon was nominated for an Oscar for her heart wrenching portrayal of Cheryl. Of note, Witherspoon is a straight stunner and she manages to pull off the dirt-on-my-face look much better than most. This might actually be the lone case where the movie is (slightly) better than the book. The film hardly deviates from the memoir at all and much of the script is drawn verbatim from the text. While Cheryl’s book offers vivid descriptions of her environment, I think it’s difficult as a reader to fully comprehend the magnitude of her journey in the imagination. I think that the treacherous paths and the physical tolls are more palpably depicted in motion picture format. I mean, Cheryl’s trip was no joke. She was an inexperienced backpacker (as in, she had zero experience) and she was poor, so there was no wiggle room for error as she scraped by on literal nickels and dimes. Her expectations fell *wildly* short of reality. For example, she assumed that she would average 14 miles a day over the course of the trip but in the first few weeks, she was only able to pull off a mile an hour pace (Strayed, 64). She also thought that the hike would be a time of intense personal reflection—a meditation among nature. Instead, her physical sufferings were so all encompassing that she could barely focus on anything else but bodily pain. She lost six toenails in total (as in, they ripped off…) and she collected innumerable bruises from her undersized boots and oversized backpack. Bravely tackling these ailments made her a stronger person both physically and mentally.

Not only was the trail difficult, it was also dangerous. Hiking alone on the trail is perilous. Hiking alone on the trail as a woman is mega perilous. Yet, she found power from within. Cheryl says, “Fear, to a great extent, is born of a story we tell ourselves, and so I chose to tell myself a different story from the one women are told. I decided I was safe. I was strong. I was brave. Nothing could vanquish me. Insisting on this story was a form of mind control” (Strayed, 51). She was intimidated by the trail--with its harsh, unpredictable weather conditions and its bears and mountain lions and rattlesnakes—but she did not let it crush her. She became a part of the raw beauty of her surroundings and realized that she too was beautiful, not just in spite of her mistakes but because of them. Her entire past had led up to this moment, on that trail, and contributed to the deep clarity that she felt having traversed the thousand plus miles. She suggests, “What if I was sorry, but if I could go back in time I wouldn’t do anything differently than I had done” (Strayed, 258)? Her massive physical and mental achievements encouraged her to embrace and love her whole self, even the self that turned to drugs at a time of overwhelming sorrow. Before her expedition, she dubbed herself “the woman with a hole in her heart”; afterwards, she had earned the name “Queen of the PCT” by her fellow hikers (Strayed, 299).

Because the film captures Cheryl’s despair and transformation so well, I give it 5 out of 5 camel humps. Clearly, though, the movie would not exist without the book. I have deep respect for Cheryl Strayed for what she endured and how she came out the other side. Her triumphs are truly inspirational. Still, in comparison to how the movie stirred my heartstrings, I give the book 4 out of 5 camel humps. Strayed is a remarkable writer (and an ardent reader!) but if you don’t like to read, the film is a perfectly acceptable replacement. Here's the link to the trailer if you want to check it out for yourself: *Trailer*