“I was alone and orphaned, in the middle of the Pacific, hanging on to an oar, an adult tiger in front of me, sharks beneath me, a storm raging about me” (Martel, 107). Yowza. This quote encapsulates Pi Patel’s struggles in the 2001 novel, Life of Pi*. Suffice to say that I’m not giving away any major plot points, considering the poster of the movie adaptation looks like this: 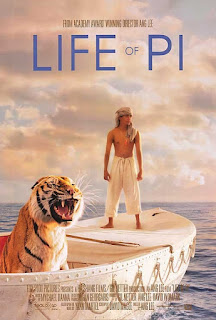 Although the movie is very visually appealing, the book takes the cake. Pi’s journey, albeit fictional, is emotional to witness as a reader. Any tale of human resilience in the face of such calamitous odds makes you feel proud to be a part of the race. The story is structured as a first-person account, based on a fictional interview that the author, Yann Martel, has with Pi Patel.  It follows Pi’s life in India >> sea voyage to Canada with animal cargo (his parents are zookeepers) >> abrupt sinking of the ship, which results in Pi and a handful of dangerous animals left on a lifeboat as the only survivors >> 227 brutal days stranded at sea >> eventual rescue. I’m exhausted just typing that.

There are many things I expect from a castaway book. Pi has a hallucinatory period in which he goes blind, and he believes that he’s able to speak to the tiger, who is talking in a French accent. That’s amusing, but it’s not necessarily shocking, given the circumstances. Additionally, when animals are involved, I presume that I’ll learn at least some basic facts about the species. Martel teaches the reader about numerous animals in a straightforward voice that isn’t too scholarly. He doesn’t go all zoologist on you, and I came away with quite a bit of practical knowledge.

I also anticipate some sort of religious aspect; if I survived such a wild series of events, I’d probably be thanking God too. What I did not anticipate is Pi’s particularly refreshing, unique take on God. Pi has a brilliantly inclusive opinion on religion, evident in the fact that he’s a practicing Hindu, Muslim, and Christian. The prophets and gods of each religion resonate with him in compelling ways, and he focuses on what he considers to be the core of each religion, rather than get caught up in peripheral details that might lead to contradiction between the faiths. His convictions are personal and he presents them without imposition.

Pi’s belief in a higher power sustains him during his suffering, because he feels that both good and bad emanate from a wholeness of the universe beyond his understanding. Religion gives him dignity, which lifts his spirits when his stout vegetarianism is compromised by the inevitabilities of starvation. He warns against human arrogance in the face of something as grand as divinity, and he compares this dynamic to the relationship between him and the beautiful, horrific, powerful beast in his lifeboat. The acknowledgement that he is but a microcosm of the divine provides him a mentality that helps him find peace while persevering. He admits, “I saw my suffering for what it was, finite and insignificant, and I was still” (Martel, 177).

The novel reminds me of The Old Man and the Sea for several reasons. One—the most obvious—is that the sea is pertinent in both novels. We see the main character’s relationship with their fellow creatures and watch how persistence in the face of the elements affects that relationship. Taking a step further, I recognize humility in the face of majesty. Pi and Santiago (the fisherman in Hemingway’s novel) exude a modest reverence for the world around them, which makes us respect and root for them. Neither Hemingway nor Martel force their main characters on readers; they present them fairly unadorned and let us be the judge.

I, for one, find Pi to be an incredible testament to the goodness in humans. While reading, I was continuously inspired by his story (and Martel’s storytelling abilities), such that I had to remind myself that the details didn’t actually occur. Of course, several people in real life have survived being lost at sea, and similarly harrowing feats occur on a regular basis outside of the ocean. But there is something about Martel’s use of an imaginary story that more aptly captures the vibrancy, range, and absurdities of human experience (as fiction typically does, IMO). As such, Life of Pi receives 5 out of 5 camel humps.

I’m taking an Introduction to Improvisation class, which permeates my life such that I’m constantly (obnoxiously) looking at the world through an improviser lens. One thing the instructor keeps emphasizing: not every scene has to have conflict. We might respond confrontationally on impulse in an improv setting, but for the most part, it’s not enjoyable to watch, and it’s not accurately indicative of what happens in real life. Usually, when someone says, “Honey, I made you dinner”, you don’t respond with, “But I hate dinner, it’s the worst meal of the day!” just to keep the conversation moving.

This speech has a point, I swear. Zadie Smith’s seminal novel, White Teeth* is a great big melting pot of conflict. Everyone is arguing with each other for 450 pages. The novel provides insight into the difficulties of immigrant families; it explores the tension between desiring assimilation and retaining traditions and identities. There are numerous main characters, because Smith performs the ambitious exploration over multiple generations. Such complex issues inevitably involve struggle, but as a reader, I have a conflict boiling point. I want someone to make nice at least once, and I grow exhausted by never-ending argumentative dialogue.

You might be frustrated by the unceasing brawls, but at least you can find refuge in great characters, right? Wrong. Smith has so much ground to cover that she doesn’t spend enough time on one person, so no character gets fully developed. The second we get to know him/her, he/she eludes us. What you end up with are plenty of potentially interesting people who do nothing but quarrel.

Moreover, the teeth motif seems forced and not very useful. I get it to an extent—having white teeth is the common factor amongst so many diverse backgrounds, and the handy (toothy?) root metaphor is easily accessible, allowing comparisons to the homeland. But it’s a pretty lame motif if you ask me, and it’s not even employed consistently. Smith weaves intricate plot lines that convey her skill, but then she randomly throws in a quip about molars. Personally, I prefer pun memes, like this one: 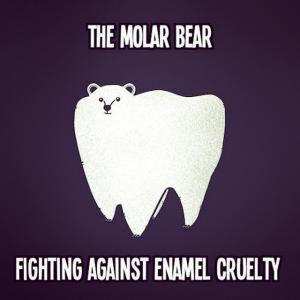 Needless to say, I’m not a huge fan of this book. I wanted to like it, mainly because of its notoriety. At the time of publication, it won numerous awards and was received well by critics. It’s even listed on this amazing “100 Essential Novels” scratch off that I got for Christmas (I recommend to all book lovers—the scratching off process is very edifying). 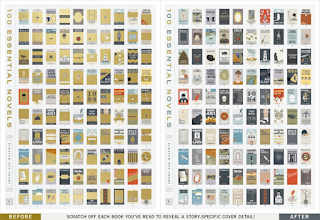 Zadie Smith wrote White Teeth at age 25, a year that I spent re-watching Breaking Bad and learning how to expand my cooking beyond pasta. Obviously, she’s a talented young woman. Unfortunately, the book didn’t do it for me, and I can’t in good faith advise others to read it. White Teeth receives 2 out of 5 camel humps.