One Flew Over the Cuckoo’s Nest

Ken Kesey participated in a CIA program known as Project MKUltra. The project experimented with various drugs and techniques on human subjects to expand methods of interrogation and torture. Kesey worked as an orderly at a mental hospital where some MKUltra tests took place. He volunteered to partake and personally recorded his experiences, expressing a fondness for LSD. No, this is not an InfoWars article. Gross.

Kesey’s role at the mental institution helped him hit a sweet spot in his writing of One Flew Over the Cuckoo’s Nest*. By working the night shift at the hospital, he could observe patients from the institution’s perspective. Alternatively, his involvement in experiments (with questionable legality and ethics) allowed him to see from the patient’s side. The line between “sane” and “insane” blurs when you realize firsthand that larger forces are at play, designed to manipulate. You are a pawn in their big game.

Checkmate! Kesey isn’t anyone’s bitch. After reading about him in The Electric Kool-Aid Acid Test, I’m impressed with his ability to be in all the craziness but also above all the craziness. He’s a participant but also seemingly omniscient. I mean, the guy elected to try electroshock therapy on himself so that he could accurately write about the experience in Cuckoo.

And, in my opinion, he nails it. Kesey’s vivid characters are no accident. Our narrator is “Chief” Bromden, a schizophrenic half-Native American. He and the rest of the ward are greatly affected when a new, raucous man, Randal McMurphy, is committed to the hospital. McMurphy is not mentally ill in the conventional sense—he uses insanity as a means to avoid his sentence at a prison work farm. Gradually, he brings clarity to the other patients who had formerly subserviently yielded to every order from above. The head nurse, Nurse Ratched, is not pleased with the patients’ newfound gall, and she and McMurphy butt heads in big ways.

Kesey is the ultimate real-life anti-conformist, so it’s fitting that he’d write a novel that addresses the oppressive powers of institutions—specifically government-sanctioned ones. Ironically, One Flew Over the Cuckoo’s Nest is one of many novels often found on banned-books lists. Nothing like trying to stifle a book about the cruelty of stifling an individual’s agency.

Mental health services in our country are still inadequate, but they’re not as barbaric as they were during the time of Kesey’s writing. Of course, the hospital in the book is symbolic of other domineering authorities that Kesey railed against; however, there is also a literal denunciation of mental health procedures within the novel, particularly electroshock therapy.

While Kesey’s novel receives largely positive reception, there are some complaints about the text’s overt racism (the orderlies’ race is ridiculed and the N-word is used) and underlying sexism (McMurphy fights “the matriarchy” aka a woman nurse and generally women are depicted as conniving to emasculate the men around them). McMurphy’s questionable character certainly warrants discussion, but it doesn’t make Cuckoo a *bad book* unworthy of reading. As I mention in my review of The Awakening, characters are complex and imperfect, which is exactly what makes them interesting, McMurphy is a sexist, racist pig, so he speaks and acts like a sexist, racist, pig. That doesn’t mean that his crusade against conformity should be ignored. His character flaws and insecurities add to the intricacy of the discussion.

Equipped with the knowledge of Kesey’s background that contributed to the unique perspective in One Flew Over the Cuckoo’s Nest, I give the novel 4 out of 5 camel humps. In the future, I would love to compare his work to Girl Interrupted, which is a more contemporary display of the problems that continue to plague mental health diagnoses and treatment.

I can now confirm the existence of extraterrestrial life forms because Tom Wolfe is certainly an alien. The man is all over the map with his skill-sets. A while back, I read and reviewed The Bonfire of the Vanities, Wolfe’s first novel, published in 1987. It is a well-written, provocative piece, but it’s also pretty “normal” in the sense that it doesn’t push the envelope stylistically. Interestingly, Wolfe is credited for creating and popularizing the “push the envelope” phrase in his book The Right Stuff.  Just remember… 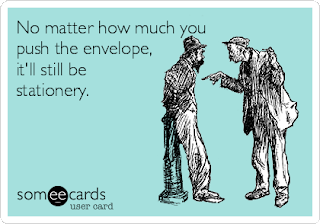 On the other hand, The Electric Kool-Aid Acid Test* tears up the envelope and throws the pieces up like covfefe. It is a nonfiction piece in which Wolfe describes the roller coaster life of esteemed author Ken Kesey and his close, cultish circle—the Merry Pranksters. The book retells actual events, following the physical, spiritual, and legal trajectory of Kesey, from when he first became interested in LSD as a mind-expanding drug while writing One Flew Over the Cuckoo’s Nest to when he introduced “acid-tests” across the country, designed to break down mental barriers and achieve ultimate intersubjectivity. Wolfe’s chronicles include the Prankster’s run-ins with famous authors (like Kerouac), Hells Angels, and the Grateful Dead.

Clearly, this is a unique subject matter, and Wolfe rises to the occasion. The eccentricity of Kesey and his pranksters requires an eccentric voice to match. So, Wolfe incorporates unconventional literary devices that jazz up otherwise objective reporting. Similar to Hunter S. Thompson’s gonzo journalism, in which the person telling the story is a key participant in the story itself, Wolfe dabbles in New Journalism—a form that blurs the lines of journalism and art. New Journalism still reports facts but from a somewhat subjective perspective.

In The Electric Kool-Aid Acid Test, Wolfe experiments through diction, syntax, and punctuation. He claims, “I have tried not only to tell what the Pranksters did but to re-create the mental atmosphere or subjective reality of it. I don’t think their adventure can be understood without that” (Wolfe 415). And he’s correct, in my opinion. He draws readers into what it feels like to be alongside Kesey while simultaneously explicitly telling us what it is like to be alongside Kesey. He captures and induces a mood, but also relays information.

For example, Kesey held the notion that “you’re either on the bus or off the bus” (Wolfe, 83). There was a literal bus 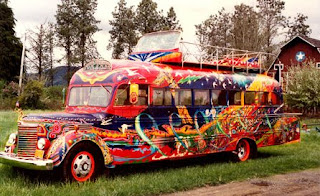 and you better get your ass on it or you’ll be left. But Wolfe doesn’t just quote Kesey and then leave readers to figure out that little cracked out fortune cookie. Wolfe shows us what it means to be off the bus, i.e. not attune to the group consciousness. The very words themselves, the rhythm of them strewn together, and the appearance of them on the page, reeks of that on-or-off-the-bus aura.

It would be difficult for a book about such an unusual cast of characters to be bad because the people are so intrinsically interesting. Kesey, much like historical prophetic figures, had persuasive, articulate, and innovative beliefs about what it’s like to exist and relate in the metaphysical world. His philosophy stemmed from the ideas of Aldous Huxley in The Doors of Perception. Luckily for you, I’ve reviewed that book and you can read all about his ideas!

Unfortunately, with Kesey as the main focus, other compelling characters remain underdeveloped. Neal Cassady notoriously inspired the big names of the Beat Generation—a 1950s bohemian literary movement that morphed into the hippie wave of the 1960s via Cassady and Kesey. The fact that we read virtually nothing about Cassady, other than his speed-fueled way of speech and daring driving, means that the content of Kool-Aid could have been better distributed. Less Kesey, more everyone else.

Speaking of less and more, the mantra *less is more* goes unheeded. The book is too damn long. Wolfe’s method of pulling readers into Kesey’s vision feels a bit like virtual reality goggles. The images are interesting and exciting…to a point. At 415 pages, Kool-Aid’s novelty wears off and ultimately feels too disjointed; thus, The Electric Kool-Aid Acid Test receives 3 out of 5 camel humps.

Have I harped on the beauty of a good short story collection enough? When I read Tenth of December, I thought I’d found *the one*. When I stumbled upon the brilliant Best American Short Stories 2013, I started having an affair with the series. Ever since, I’ve been like

For real, well-written short stories are great for the soul. The good ones strike the perfect pace-- drawing readers in to efficiently evoke emotion. Every word counts, because space is limited. Plus, it’s a very practical form; short stories are there for you when you don’t have much time and they’re ideal book bait for self-proclaimed non-readers.


Interpreter of Maladies* is a short story collection written by Jhumpa Lahiri that won the 2000 Pulitzer Prize for Fiction. It consists of nine stories that all involve Indians or Indian Americans. More often than not, characters cope with displacement. The characters must navigate the cultural ramifications of existing outside of a familiar space. They explore their identities through their relationships with others as well as their connections to their homeland.

Considering the fact that the general subject matter remains the same for all, each piece has an impressively distinctive voice. The tone is usually somber, but instead of overwhelming readers with the sadness of the plot, Lahiri reminds us of the human being behind the experiences. Even if things don’t go their way, characters find a way to endure the pain. Thus, Lahiri has created more than just a geographical understanding of Indian immigration. She has drawn an emotional map of how to steer through traumatic terrain and reconcile your roots with newness.

I enjoyed some stories in the collection more than others, but every piece interested me in its own right. The Pulitzer Prize peeps got it right this time (see these older reviews of Pulitzer-winning works, some of which are phenomenal while others disappoint): All the Light We Cannot See, A Visit from the Goon Squad, The Brief Wondrous Life of Oscar Wao, Middlesex, Beloved, To Kill a Mockingbird, and The Old Man and the Sea. Additionally: Your Movie Sucks, which won a Pulitzer Prize for Criticism, not Fiction, duh). Interpreter of Maladies receives 4 out of 5 camel humps.