I was curious about Girl with Curious Hair* because I am a straight up David Foster Wallace (DFW)-apologist after reading Infinite Jest. I wanted to know if his talent applied to an 1,000 plus page novel as well as stories as short as a page and a half. It does…sometimes.

The collection consists of ten stories, two of which are particularly impressive. “Little Expressionless Animals” gives us a fictional backstage pass to a season of Jeopardy! with a contestant who can’t be beat. DFW shows us a quirky Alex Trebek via conversations with his therapist and now I can’t look at Trebek the same. The eponymous “Girl with Curious Hair” peeks into the mind of a sociopathic assumedly straight-laced Republican lawyer who has dark relationships with punk rocker friends. These contain obviously intriguing characters, and I could have read hundreds of pages about them.

DFW had a tendency to write consistently verbose characters no matter their background or education. I really like that style, and I think it makes him completely unique as a writer. He’s not succinct and he doesn’t want to be. He says, “Nunn manufactured an unarchitectural and spontaneous entryway in the bay window of the front of T. Rex’s spread’s Big House” instead of “Nunn broke down the door” (Wallace, 138). That’s his m.o., take it or leave it.

If you’re looking for a one-way ticket to Depravity, check out Choke by Chuck Palahniuk. Palahniuk labels his work “transgressive fiction”, a genre featuring characters who feel oppressed by society’s norms, so they renounce expectations in radical, illicit ways. Think American Psycho.

And while you’re thinking of Fight Club, you’re basically thinking of Choke. Although the plot is wildly different, the basic sentiment and writing style is very similar. You have characters proclaiming emptiness of the soul and vapidity of their fellow man; they want to feel something meaningful by any means necessary. In Choke, the main character turns to a convoluted performance: choking on a regular basis, claiming that by doing so, he gives the people who save him purpose and strength. He also turns to sex, which leads to an addiction, graphically described. He also turns to his love-hate relationship with a mom who is an abusive schizophrenic on her deathbed. There’s a lot of weird shit going on. He’s “Alive and unwell” (Palahniuk, 14).

When I first read Fight Club, I thought Woah, this guy really has some things to get off his chest. It is funny but also genuine in its critiques of society; his writing style conveys the amusing absurdity in a way that I had never read before. When I got to Choke, the funny critiques were still there but the newness had worn off. Palahniuk sort of sabotaged his own work—perhaps his own contribution to Project Mayhem. That being said, it isn’t bad; it has its own unique moments of satire and its own unique insights into a messy, vulgar world. Choke receives 3 out of 5 camel humps.

Posted by Humpdayhardbacks at 1:00 PM No comments:

Raise High the Roof Beam, Carpenters and Seymour: An Introduction

As we celebrate America, let’s also celebrate an American hero: Jerome David Salinger, aka J.D. Salinger. I mean, this mug looks like it could have settled the frontier for sure... 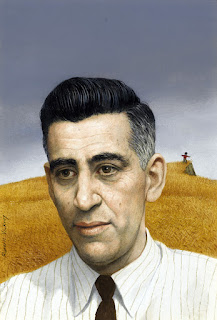 Most people know him as the author of The Catcher in the Rye; however, we’re going to focus on the fictional Glass family, which he almost exclusively wrote about following the success of his first novel. I reviewed a Glass family banger, Franny and Zooey, a couple of years ago. Now, we’ll turn to Raise High the Roof Beam, Carpenters and Seymour: An Introduction*, two novellas that were featured in The New Yorker in 1955 and 1959, respectively.

Both stories are written from the point of view of Buddy Glass, the second oldest out of seven children. The Glass family is full of precocious little nuggets but somehow Salinger manages to tow the line and prevent his characters from reading like pretentious assholes. Instead, they write straight to your soul. Buddy addresses readers directly, brings us along for a story, and vulnerably lets us peek into his psyche. Having read multiple Glass family stories now, I can conclude that Salinger is the original Seinfeld in that he makes books about nothing. He captures the idiosyncrasies of daily life and mundane dialogue and brings them to our attention. Side effect: entertainment, insight, empathy.

Raise High the Roof Beam, Carpenters and Seymour: An Introduction receives 4 out of 5 camel humps.