I found Thanks, Obama: My Hopey, Changey White House Years* on the sidewalk of the East Village in the spring of 2018. I’m thankful for whoever left it for me; I feel connected to him/her because I got a glimpse into their life. On the inside cover, there’s an innocent to-do list: Pick up sunscreen, lip balm, allergy pills. Sounds like a joyous day at a beach surrounded by tree pollen. Then there’s a quaint line: “Buy paper at great little paper shop”. Maybe they were tired of using the inside of books for note-taking.

I’m a liberal snowflake, so the title spoke to me for obvious reasons. The memoir is by David Litt, a young Obama-era speechwriter. He is currently the head writer/producer of Funny or Die and he’s well-respected within the comedy community, evidenced by his impressive back cover endorsements. I’ll include John Mulaney’s since John Mulaney is perfect: “An outstanding, hilarious, and precise memoir, and an excellent account of what it felt like the work for the second to last president of the United States.”

As much as I love a good Trump jab, especially by horse-in-the-hospital Mulaney, I did worry the book would overflow with anti-Trumpisms. I mean-- I don’t like Trump, duh, but I can only handle so much not-hot-take political whining. I turn to Twitter if I want to be sad about policy. In a book, I want anti-Trump rhetoric to be funny or not there at all. Litt does in fact skillfully slide in the Trump comparisons without overstating the obvious.

While Litt wrote many types of speeches for Obama, he was considered the “funny guy” on the speech-writing team. I am surprised at how pertinent “joke writers” were throughout Obama’s presidency. I figured it might only be necessary for the White House correspondents’ dinner, but turns out there were plenty of opportunities where Obama wanted to bring comedy into his speeches. I enjoyed learning about how the speech-writing network operated and Litt explains the power structure well. There are many references to fellow speechwriters, like the Pod Save America dudes. To be honest, I’m a little sick of those guys yapping, but I listen to them anyway because what are podcasts for if not to cram information in your head that you don’t necessarily want or need?

A big perk of Litt’s memoir is insider info. It doesn’t shy away from controversy-- it talks about the problems within the administration, like when the initial roll-out of Obamacare was a disaster, and how the speech-writing team worked to respond. But it also reminds us of all the good things about Obama and I like the glimpse into his interpersonal life.

On the other hand, I think that the memoir is too long and Litt squeezes the juice out of every single possible interaction he had with the president. His writing is relatively down to earth (given that he worked for the most powerful man in the world) and I am interested in most of the stories he tells, but some of it is clearly padding. Overall, Thanks, Obama: My Hopey, Changey White House Years receives 3 out of 5 camel humps.

Gorilla and the Bird

Zack McDermott was a public defender in NYC when he had his first psychotic break. Convinced that he was being filmed à la Truman Show, he waltzed out of his East Village apartment and put on a show. He got a bipolar diagnosis instead of a Golden Globe.

At first, I was nervous to review Zack’s memoir, Gorilla and the Bird*. My lovely friend Sarah Keenan recommended it to me because she and her husband Mike are friends with Zack. Zack and Mike went to UVA law school together (swag). In fact, Sarah designed the dope original cover for Little, Brown & Company: 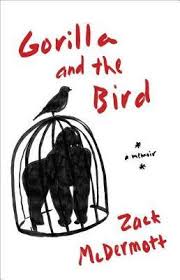 Also, Sarah and Mike get a shout out on the memoir’s acknowledgments page--before Channing Tatum, who optioned the book. A limited series based on the book will be released by HBO and directed by Jean-Marc Vallée (the dude behind Big Little Lies and Sharp Objects). What I'm saying is-- I'm famous and talented by association.

With my nepotistic ties, I feared that I wouldn’t like Gorilla and the Bird but that I’d have to lie and fake-rave about its merits. Thankfully, I don’t have to do that, because Gorilla and the Bird is very, very good. I truly didn’t want to put it down because I had to know how he'd end up and how the people he represented as a lawyer would fare. He explains the complexities of our messed up legal system well and the backgrounds of the people he defends are humbling. Zack speaks with genuine empathy; he sees the parallels between his own tumultuous upbringing + newfound mental disorders and the systemic struggles that vulnerable, imprisoned populations constantly face. Perhaps he would be in their shoes if he didn’t have the fierce love and guidance of his mother (“the Bird”) to swoop in and assist.

I’m not bipolar, but there’s something about books like Gorilla and the Bird and Brain on Fire that feels uncomfortably close to home and thus even more horrifying. Both authors were just trying to kick it in their 20s, balancing relatively new jobs with their social lives, when illness abruptly struck them and invasively attacked their world. Zack uses levity to cope, which makes for strong, relatable writing. As he says, “Shit got better because hard shit usually does” (McDermott, 50).

Big sigh of relief that I actually loved the book and can return it to my friend without feigning a book-orgasm! Gorilla and the Bird receives 5 out of 5 camel humps. Zack will be appearing at the Virginia Festival of the Book in March (more deets here). You can also find out more about his GorillaBird foundation, which seeks to end the “mental illness-to-prison pipeline”.

*McDermott, Zack.  Gorilla and the Bird. New York: Little, Brown and Company, 2017. Print.
Posted by Humpdayhardbacks at 3:51 PM No comments: