Amy Poehler is a funny person. I don’t enjoy every single thing she has done, but she has certainly dished out some gems. She leads an inherently interesting life, so she’ll inevitably have good stories for her autobiography. She’s not a regular mom; she’s a cool mom.

Yes Please* covers her cool-motherhood and her work. Poehler graces us with UCB-starter stories, juicy SNL tidbits, and insider knowledge on Parks and Recreation. Yes please! Keep those coming.

I could read hundreds of pages on the above. Sprinkle in some behind the scenes info on Mean Girls and Broad City and you’ve got Poehler perfection. Unfortunately, while Yes Please does partially appease my longing to learn more about her past projects, there’s also a lot of “filler”. I understand that as an autobiography, the book will address her life as a well-rounded woman, not just her film credits. However, there are several chapters that strike me as forced material to fill space. A chapter on how she has semi-weird sleeping habits? Not particularly original, despite the intermittent funny quips. A chapter on how phones and technology are taking over our lives? Not a hot take.

The weirdest part about her book is her frequent insistence that “writing a book is awful” (Poehler, 195). You get the impression that she doesn’t like the process and would prefer to be working on a script. Not exactly a welcome wagon for people reading your stuff.

I don’t want to hate too hard on her book because my expectation was not that Yes Please is serious literature asking for annotation and deep analysis. It’s a light-hearted book by a self-aware, candid comedian. No, it’s not a contender for the Nobel Prize.

Amy Poehler is often compared to Tiny Fey, her self-proclaimed comedy wife. In May, I reviewed Fey’s autobiography, Bossypants, which I like slightly more than Yes Please. Fun fact: I read on a very reputable website with a very efficient layout that Tina Fey’s net worth is more than double that of Amy Poehler. Not only is that fact unnecessarily money-grubbing, it also encourages women-on-women hate. This blog is great!
Overall, Yes Please receives 3 out of 5 camel humps.

The Year of Magical Thinking

I did not pick up The Year of Magical Thinking* to alleviate my own grief; I picked it up because I mistakenly thought it was one of Joan Didion’s novels, and she had been on my literary list for a while. Boy, was I in for a sad, sad treat. Didion is an award-winning writer-giant with experience in fiction, screenwriting, and political reporting. Her memoir, The Year of Magical Thinking, reveals her attempts to make sense of the death of her husband, John Dunne. Her grieving process is complicated by the fact that their only daughter, Quintana Roo (you read that correctly), faced grave, ongoing health issues requiring consistent hospitalization during the time of her husband’s death.

John Dunne was also a writer as talented and acclaimed as his wife. This was a fabulous couple and they did fabulous things. As such, Didion name drops and I dig it. Her life was cool, sophisticated, and privileged. Was she supposed to pretend in her memoir that it wasn’t? Why wouldn’t I want to dip in that luxury pool for a bit? It has jets, bubbles, and floating gardenias!

Because of their unique occupations, Didion and Dunne spent an unusual amount of time together and were extraordinarily dependent on one another. They spent their days writing in unison and always edited each other’s work. When describing their routine, Didion says they walked together in Central Park every morning. She explains, “We did not always walk together because we liked different routes but we would keep the other’s route in mind and intersect before we left the park” (Didion, 36). From my perspective, I think this description perfectly encapsulates their marriage, in which both members are independent yet fiercely intertwined. They were crazy close so you can imagine the devastating impact of his death.

Well, you don’t have to imagine, because you can read her book. Didion’s words are not the pouring out of raw emotion that you might expect from a new widow. She is a writer who is in shock. Her world has just turned upside down and she is trying to figure out how to continue to live in it, which includes continuing to write. The memoir appears to be cathartic for her, as she brings to the surface the acute pain of his absence. She acknowledges that it is difficult for her to understand John’s death as something that happened to him as opposed to something that happened to her (Didion, 77). She relies on literature and psychological studies to confront her mourning as a “transitory manic-depressive state” (Didion, 34). Her efforts to rationally address his death can sometimes give off detached vibes, but who am I to judge this woman’s coping mechanisms?

I can only judge her writing, and I’m into it. Her words offer uncomfortable yet beautiful insight on the human condition. She notes toward the end of the memoir, “We are imperfect mortal beings…so wired that when we mourn our losses we also mourn, for better or for worse, ourselves. As we were. As we are no longer. As we will one day not be at all” (Didion, 198). I don’t know what “typical” novelist or essayist Joan Didion is like, but I’m intrigued to find out after this little taste. The Year of Magical Thinking receives 4 out of 5 camel humps.

Steinbeck is an incredible storyteller. He’s always straight with you, he never pussyfoots around, and he taps into some complicated emotions that were applicable at the time of his writing (early 1930s-1960s) as well as today. Tortilla Flat*--one of his earliest novels—is set in Monterey, California. Unlike the flashy Monterey we see in Big Little Lies, the characters of Tortilla Flat often resort to theft as a result of their poverty. Like Big Little Lies, the characters of Tortilla Flat love a fat glass of wine.

The crew in this novel rolls deeeeeeeeep. We’ve got Danny, Pilon, Pablo, Jesus Maria, Big Joe, the Pirate, Johnny Pom-pom, and Tito Ralph. They are used to relying on community and camaraderie to stay alive, so when Danny unexpectedly inherits property and they have a house for the first time, they run into new moral conundrums. The novel contains several parables, and Pilon (the “wise” one) often interprets the stories’ meanings for lessons that they can apply to their latest problem. His ingenuity shows us that if you want something badly enough, you can pretty much always find a morality loophole to justify wrongdoing. The book contains a lot of sin but also a lot of forgiveness; it redefines the delicate balance of good and evil contained in every one of us.

Tortilla Flat is different from Steinbeck’s other work (like East of Eden, The Pearl, and The Red Pony) in that each chapter reads like a short story. There is an overarching narrative, but each chapter can also stand alone. Each chapter also happens to have a badass name. Apparently, it was a thing back then to have very descriptive chapter names (I’ve also seen this in A Room with a View). On one hand, it’s helpful to know what you’re going to get; on the other hand, it’s humorously specific and I can’t take it seriously. Two titles in Tortilla Flat that had me geeking:

“How Danny’s Friends sought mystic treasure on St. Andrew’s Eve. How Pilon found it and later how a pair of serge pants changed ownership twice”

Let’s all acknowledge that vacuum cleaners are scary, including the grumpy one in The Brave Little Toaster. 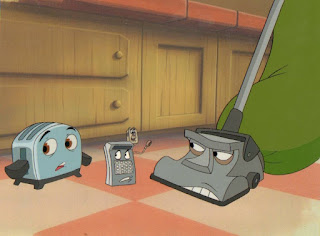 So, Danny—I get you. Aside from the giggles I got from reading the chapter titles, I take Steinbeck seriously because he’s a prolific author of Western literature like no other. Tortilla Flat receives 3 out of 5 camel humps.