Colorless Tsukuru Tazaki and His Years of Pilgrimage

Konichiwaaaaaaaaatthehell? Haruki Murakami is a renowned Japanese author, who has written 13 novels, several essays and short stories, and a memoir. I reviewed his memoir, What I Talk About When I Talk About Running, quite favorably, so I was disappointed to discover that his latest novel Colorless Tsukuru Tazaki and His Years of Pilgrimage* is as dull as the title implies. Murakami has a massive fan base and readers trust that he’s consistent. Grant Snider from the New York Times even created a Murakami-Bingo that acknowledges his thematic tendencies: 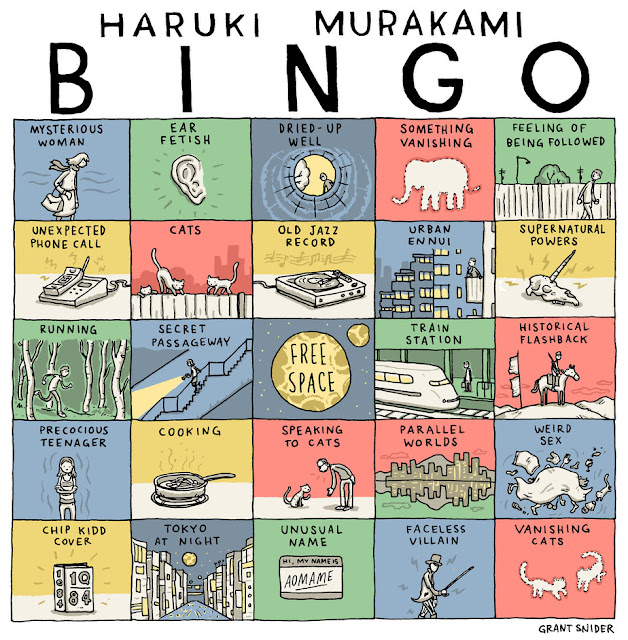 But just because I liked one book doesn’t mean I’m going to drink the Murakami Kool-Aid indiscriminately. He might have previously produced stellar, prize-winning works, but that doesn’t guarantee 5-hump ratings from thereon, especially not on a hard-hitting site like this!

CTTAHYOP follows Tsukuru, a 36-year-old engineer in Tokyo. It’s a story about identity; he must come to terms with abandonment that he experienced in the past in order to appreciate his current value. He must bravely confront the answers to age-old questions in order to mature, move on, and open up to the possibility of a relationship built on intimacy. Initially, I had no qualms with this plot. I looked forward to exposing the mystery that shrouded the death of his former friendships. But once Murakami gave that to me, he didn’t really give me anything more. Picture this: it’s my birthday. There’s an expectation associated with that day—an anticipation of excitement. I arrive home after work to find hundreds of friends (all those hundreds of friends I have) in my apartment, yelling SURPRISE! Then everyone vanishes. Party over. Why even come over in the first place? That’s what this novel was for me: I wondered what the secret was….I found out the secret…and then nothing substantial occurred. Sure, Tsukuru was able to be a normal dude once he put the past to bed, but that’s not exactly riveting literature. At least at the end of my failed surprise party, there’d be a leftover cake.

Unfortunately, the content-letdown is one of many disappointments. You’d think that after decades of experience, Murakami would have mastered the art of analogy. CTTAHYOP employs similes that actually obscure the comparison more often than not. For instance, when Tsukuru interacts with an inconsequential receptionist, Murakami over-saturates the scene in needless detail. He writes, “She took Tsukuru’s business card, her whole face lighting up in a smile, then pushed an extension number on her phone as if pressing the soft nose of an oversized dog” (Murakami, 153). How is this remotely helpful? It’s not painting a picture; it’s dragging down the pace. I don’t need to know how this rando character we’ll never see nor hear from again is pressing a goddamn button. Also, what is pressing the soft nose of an oversized dog like? Is it different than an undersized dog? Don’t press dogs’ noses because that’s weird and you don’t know where they’ve been. Unless it’s a dachshund, in which case, definitely press its nose because it will probably respond adorably. Obviously, this is one nitpicky example, but seriously—the novel is overrun with unnecessary shit like this.

Even when the descriptions are logical and informative, they bore me. Check out this example, where Tsukuru imagines his love interest with another man: “He lay down on the sofa, images buzzing through his head, when suddenly it felt as if a sharp needle had stabbed him in the back. A thin, invisible needle. The pain was minimal, and there was no blood. Probably. Still, it hurt” (Murakami, 282). Those last two sentences… I die. Describing emotional pain in this jerky, calculated way does not resonate with me. Is there blood or is there not blood? You shouldn’t leave needles lying on your couch because then when you’re hurting internally you won’t know if it’s just that or if you’ve literally been stabbed while lying in anguish. There are more effective ways to communicate affective states.

I know I’m being kind of an asshole, but this is frustrating! How is an author that’s supposed to be so good giving me this crap? I recognize that this is Eastern writing and maybe something was lost in translation. But I have always enjoyed works from that hemisphere so I don’t accept that a cultural clash is the root problem. This is not the worst book I’ve ever read (ahem, looking at you Naked Lunch and As I Lay Dying). I am dissatisfied with the story and particularly confused that he spent several chapters on one character, Haida, and then never brought him up again (Parallel universe? Maybe? Confused.). Still, I never had the urge to shred the book; so, Colorless Tsukuru Tazaki and His Years of Pilgrimage* earns 2 out of 5 camel humps. This won’t be my last Murakami book, but I’m definitely more reluctant going forward.